It is a well-known fact by now that making your employees happy and satisfied is crucial. Whether it’s about avoiding labour shortage, fluctuation or initiating an effective workflow in the office, managers need constant feedback on their company in terms of employer branding. But what makes employees happy and satisfied? Neticle’s text and survey analysis tool, Zurvey.io helps you answer this question within minutes. We thought it would be credible to show you how by analysing our own employment satisfaction survey. A product’s value is best proved if the creator team is using it in real life.

Zurvey.io is an AI driven text and survey analysis tool which automatically recognizes the positive and negative meaning of the phrases and also summarises the answers' key related topics, persons, brands, attitudes and hidden patterns on many languages (currently BG, DE, EN, HU, PL, RO, RU, UA, GE). The results of the analysis are shown on visualized graphs and charts on Zurvey.io’s own, easy-to-use online dashboard.

Neticle was founded in 2012 and currently we are one of the fastest-growing startups in Hungary. Our colleagues have flexible working hours, home office opportunities and unlimited days-off. Transparency is key to our employment: wages are based on position and are public information likewise with every business decision. The hierarchy is flat, meaning the decision makers work with the co-workers rather than instruct them top-down.

I. THE NEGATIVE REVIEWS

The first question in the employer branding survey asked the colleagues to rate Neticle as a workplace out of ten. The average result was 9.25 on a scale of 1 to 10, which is an outstanding achievement but we were not surprised since the atmosphere in the office is always good. But the good result does not mean that there were no criticisms.

HOW ZURVEY.IO HELPED US

The second question asked what they would change, and there were many surprising results. We focused on these answers as we needed to analyse negative opinions in order to know what to improve in the company. Thanks to our automated and intelligent text analysis tool, Zurvey.io, the whole process took us no more than ten minutes, after collecting the filled forms from the employees. Zurvey.io’s easy-to-use dashboard showed us several charts with different aspects of the analysis. This way we could identify the pain points and the positives immediately. Furthermore, we also saw the correlations between the problems frequently mentioned together, despite not having read the answers ourselves.

Zurvey.io’s analysis revealed that the first problem regarded the office. Every sixth person answered to this question that our workspace could be better. Most of them described the office as too small and claimed it was getting harder to have enough space as the company rapidly grows and more and more people are hired. Besides, similar problems in connection with the office were that it tends to be loud. Some suggested the idea of a silent room. The third main pain point regarding the office was the mess in communal rooms. Many of these responders found the kitchen and the dining hall rather messy, complaining about co-workers who do not clean up after themselves.

The second problem that the employees emphasised was the organization structure. 9% of the employees who responded to this question claimed Neticle has grown so fast that it is time to rethink about the ways we operate. They also gave several suggestions to improve this part of the company:

When we asked the employees about Neticle’s advantages, almost everyone mentioned the friendly nature of the team. They appreciated that the atmosphere is warm and sociable, they like how workplace friendships are formed through such things as weekend trips and happy hour gatherings. And yet, this cozy environment does not ruin everyday effectiveness and performance. In fact, multiple answers mentioned that this informal community actually motivates them more than an ordinary company. As it turned out, they also like how there are no power games, conflicts, bad mouthing or tactical “friendships” in order to climb the career ladder.

As the analysis shows, independence and trust from the leaders are the most important to the employees. The colleagues appreciate the freedom and opportunity for creativity they get when working on a task. Being able to have a say on every ongoing project in the company is widely welcome. They value how the decision makers are curious about their opinion and they give them a long leash when it comes to independent working, as well as home office and holidays. As many of them mentioned, this way the colleagues really notice how the company’s growth is possible because of a successful and happy teamwork.

Last but not least, people really like how all the effort and work pays off by rapid growth and successes. They emphasized how victorious it feels to be present already in six countries with Neticle. They are also grateful for working for a company they can be proud of.

Based on the aforementioned positive comments from the employees, we rewrote our job advertisement and added more specific Neticle advantages. Thanks to these changes, our Business Development Director position reached the highest number of relevant and professional applications in Neticle’s hiring history.

As this study shows, even at smaller and more informal companies new voices and opinions can be revealed when doing an employer satisfaction survey. It is very important to hear every comment, opinion and remark because considering them will make your workplace better and likeable to the employees. Thanks to Zurvey, the automatic text and review analysis tool, it won’t even cost you time or effort to detect these important insights. All you need to do is consider the results that the visualized charts show you on Zurvey.io’s interactive, easy-to-use dashboard.

Constant reformation is our motto when it comes to improving the surface of Zurvey.io. While we’ve...

We are working on Zurvey.io's new functions as quickly as possible to ensure that we meet all the... 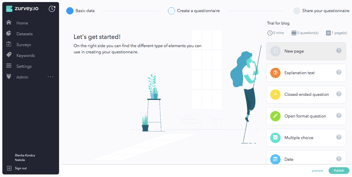 One of our long-time project was to extended Zurvey.io’s features with a survey creating platform....